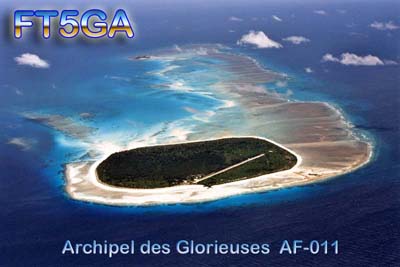 The Glorioso Archipelago (7 km²) consists of two coral islands: Grande Glorieuse (3 km in its larger diameter) where the human installations are, and Ile du Lys (circular island, 600 metres in diameter) which is desert. The archipelago also includes two rock islets – Roches Vertes and l’Ile aux Crabes – as well as a sand bank more or less above water at high tide. At the East and North east of Grande Glorieuse are a series of dunes reaching a maximum elevation of 12 m. The islands and rocks are surrounded by a reef and a lagoon which is drained dry at low tide. The Glorioso islands are situated 220km North West of Diego Suarez (Madagascar). (Economic Exclusive Zone: 48 350 km²)

The island became French territory in 1930. Around 1912, a French came from the Comoros and planted there a fine coconut palm plantation. Exploited until 1958 by people from the Seychelles, it is currently abandoned. There are also filaos. Fauna consists exclusively of a rather large colony of terns.

The meteorological service of the French colony in Madagascar installed on the island a rather primitive weather station in 1955, which was opened only during the hurricane season from October to April.

Since 1960 the station is open all year round. The importance of this station is clear. It predicts cyclones for the North Madagascar and Comoros area. It ensures safe navigation on the Madagascar-Djibouti-Madagascar and Kenya-Mauritius-Kenya air and maritime routes.

The French Team is making a very great job at the moment! The pile up is very HOT hihihih… But operators are managing it in very good way.

The time schedule of the Dxpedition is until 5th October. At the moment I have worked it only in 20m usb. But signals on 20m and 15m are very solid during all the day, both in cw and ssb.

FB QSO TO ALL AND STAY TUNED.